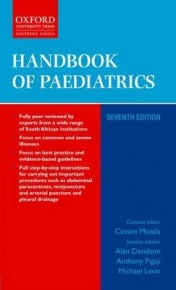 Handbook of Paediatrics 7e is aimed at final-year medical students, and doctors in general and paediatric settings. Designed as a quick reference rather than a textbook, it gives medical practitioners practical guidelines for managing critical problems such as HIV infection, tuberculosis and malaria. The new edition of the handbook focuses on common and severe illnesses, ensuring that it is a practical book aimed at diagnosis and treatment of problems and diseases at secondary level, rather than a tertiary hospital based guideline book. Chapters generally follow one of two structures - Chapters which deal with diseases are written as a protocol for management which deal with approaches to problems: are written as a flowchart or with bullet points. As far as possible guidelines are based on best practice and evidence based guidelines such as WHO, NICE, EDL, with local practice clearly designated where it may deviate from these guidelines. User-friendly icons indicate quality of evidence